The Opioid Crisis Escape Room is a fun and impactful experience for prescribing students to learn about the dangers and prevention of opioid abuse. It is:

The escape room consists only of every-day, lightweight and digital materials 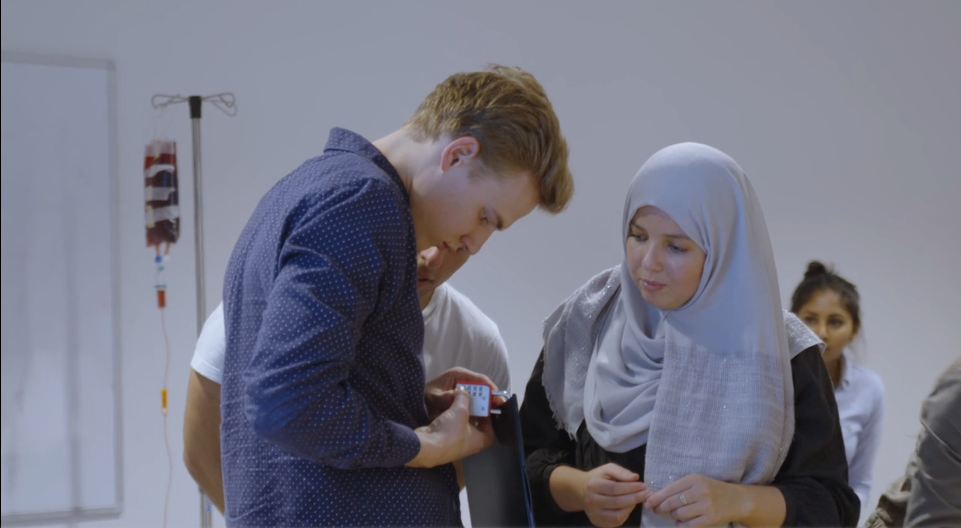 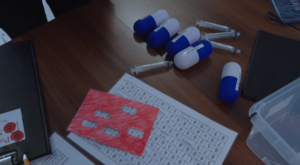 Step 1: Opioid abuse awareness day
A pair of scissors, locked around its handles with a padlock, was placed in the room. The combination code for this padlock was hidden in the agenda of an opioid addicted patient.

In order to find the code, players first needed to find a poster about the “opioid abuse awareness day”. Opening the agenda on the day of this event would reveal the code for the padlock and allow the players to progress.

A “code revealer” (red object in image) was placed in a hard plastic folder and tightly closed using a tie-rip. Only by unlocking the scissors’ handles, players were able to cut this tie-rip and obtain the revealer. A codesheet, containing many numbers as well as various symptoms, was placed elsewhere in the room.

By placing the revealer over the codesheet, in such a way that it showed the correct (and none of the incorrect) symptoms of withdrawal, the remaining holes in the revealer would show another (four digit) padlock combination.

Step 3: The treatment of addiction

The found combination would unlock a medication box with a variety of pills (pill-shaped stressreleavers, with medication names written on them) and syringes. A (mock) treatment guideline for opioid addiction was placed elsewhere in the room. By carefully reading this guideline and placing the pills and syringes in the correct order, players could reveal the final combination. In order to do so, they not only had to place the pills in the correct order (to show the numbers on the backs of the pills), but also had to calculate the amount of milliliters for any of the injections (syringes had no numbers written on them).

The final combination was to be used in the “meta-puzzle”. See below.

Created by: the teaching staff 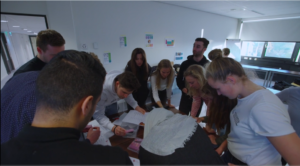 This meta-puzzle was themed around the situation of having to prescribe appropriate pain medications for one of the residents in the “Poppy fields nursing home”. However, the players were both unaware of which resident was  to be treated and what was the appropriate prescription. Moreover, they had to prescribe the medicines in the electronic prescribing system before the time ran out (30 minutes).

To solve this “meta-puzzle” players were required to first solve the four other puzzle paths (like the one explained above). This would provide them with four unique combinations for digitlocks and letterlocks. These opened the following:

First, players needed to figure out which patient to treat. To do this, they had to compare pills in the pill box to the 5 medication lists. Only one of the medication lists was fitting, thus providing the players with the name of patient in question.

Secondly, they needed to find this patient in de electronic patient file and see what his/her pain-related problems were.

Lastly, with the use of the guideline, they needed to make the appropriate prescription. Any wrong prescriptions would “stall” the prescribing system for one minute, thus costing the players valuable time.  In order to teach students about the dangers of opioids, all prescriptions were either for low dosages and short periods of opiates, or alternative painkillers (i.e. NSAIDS or  acetaminophen).

Timely and correct prescriptions revealed a congratulatory message, stating that the players had succesfully “escaped” the room. Times were noted on a scoreboard.

We aim to evaluate the educational effects of this escape room and the novel idea of letting students create their own escape room. Publications will be listed here in the near future.

Do you wish to know more about the Opioid Crisis escape room? Perhaps use it in your own prescribing curriculum? Or do you have any other question? Please feel free to contact us via m.bakkum@amsterdamumc.nl

Funded by Erasmus+ under: 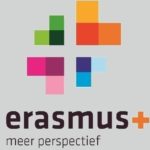